I’ve been meaning to write this review for a while. And luckily an invite to a special wine dinner at Nutmeg was the catalyst for me to finally put fingers to keyboard and tell you what I think about this vibrant Clifton Indian restaurant.

Opened in late 2016, Nutmeg was quickly receiving high praise from locals, reviewers and even The Curry Crusaders (who reckoned it was their highlight of 2016). Since then the restaurant has gone on to feature in the Michelin guide and win at the Bristol Good Food Awards – but does the experience live up to the hype?

Yes. Yes it bloody does.

A quick heads up on Nutmeg: they aim to showcase the cuisines of all 29 of India’s states, not only through preparing well-loved dishes such as Biryani and Rogan Josh, but also introducing us to more unfamiliar treats, such as Monkfish Moli or Mangalorean Squid.

You can go off their regular menu which has more than enough to sate those wanting to stick with something recognisable, or you can indulge in one of their special tasting menus (at time of writing themed around Rajasthan – four course & sides for £28, or £48 if you also want a wine flight – excellent value if you ask me).

On previous visits I’ve been wowed by dishes such as the beef madras (so, so tender) and pork cheek vindaloo (gorgeous, but a little on the ‘holy-sh*t’ end of fiery), but enough about the past, what did the evening in question deliver?

I arrived with little idea of what the night entailed, other than that there would be wine and curry – as if I need any further encouragement.

Wine expert and Guardian journo Fiona Beckett was on hand to explain the wine pairings and a bit of trivia behind each wine, both interesting and a good test of how drunk I was by the end of the evening, ten (yes, TEN) wines later.

I wouldn’t think to order a bottle of wine with my curry, and so I was intrigued to see what we were given with each dish, all ten (yes, TEN) of them.

Unravelling our cute scroll of a menu (apt, given the size of it), I was immediately giddy at the dishes that lay ahead. Dishes that sprang out at me were the octopus onion bhaji, tandoori rabbit and red snapper. Phwoar and double phwoar.

First up, Golgappa Puri: Fried hollow crispy balls filled with tamarind water, chilli and chaat. A lush street food snack and very moreish, with an addictive mix of different flavours, textures and sensations. My friend once told me he ate about 40 of these bad boys at a party, and I can totally believe that.

This was paired with a Calmel & Joseph Blanquette de Limoux Brut NV, a delicious glass of fizz that wasn’t too much of a departure sensation-wise for those of us used to washing down spicy dishes with a crisp beer – although a far fancier alternative. Champagne and curry – who knew!

All were a generous size and looked very inviting. I started with the king prawn, nicely cooked and resting on a rich and umami-tastic sauce. The Navabi chicken was like a gentler and more refined chicken korma, and the tandoori rabbit was delicately spiced and tender enough to make me reconsider my ongoing dismissal of rabbit.

Here's a possible clue as to why this Indian spiced prawn worked so well with wine @nutmegbristol https://t.co/p41Bkq51sh #matchoftheweek pic.twitter.com/0FX2PdwVRf

The octopus onion bhaji was one I could see deviding folk – the bhaji itself was damn fine, dense and flavoursome without being greasy, but the gelatinous tentacles sticking out of the top might put some off. Not this guy right here though, I wolfed down the lot.

My favourite was the Los Vientos  (very drinkable), but it was so interesting to see how the different aspects of the wines was brought out by each starter and different spice combinations.

On to the curries. Kochi Meen (red snapper with coconut, mustard seeds & curry leaves), and Chicken Makhani (tandoori chicken in tomato & fenugreek sauce) were both bursting with flavour – red snapper is one of my favourites and it really suited this light and fragrant sauce. I tried to go easy on the rice, knowing that we still had a few more dishes to go.

Our final savoury course was lamb biryani and pork cheek vindaloo. The lamb biryani came up with a nice little flatbread lid, allowing the rice to steam gently inside the bowl. Another gentle dish, which was nice alongside the punchy vindaloo – which had been toned down a notch or two since my last visit (owner Raja assured me they’d be knocking the heat back up in winter – be warned) – allowing us to devour all of the rich  unctuous sauce. I’m never usually a fan of a vindaloo or needless heat, but they’ve smashed it with this one.

I was quite tipsy* by this point, but the Tempranillo was a definite hit from my side. 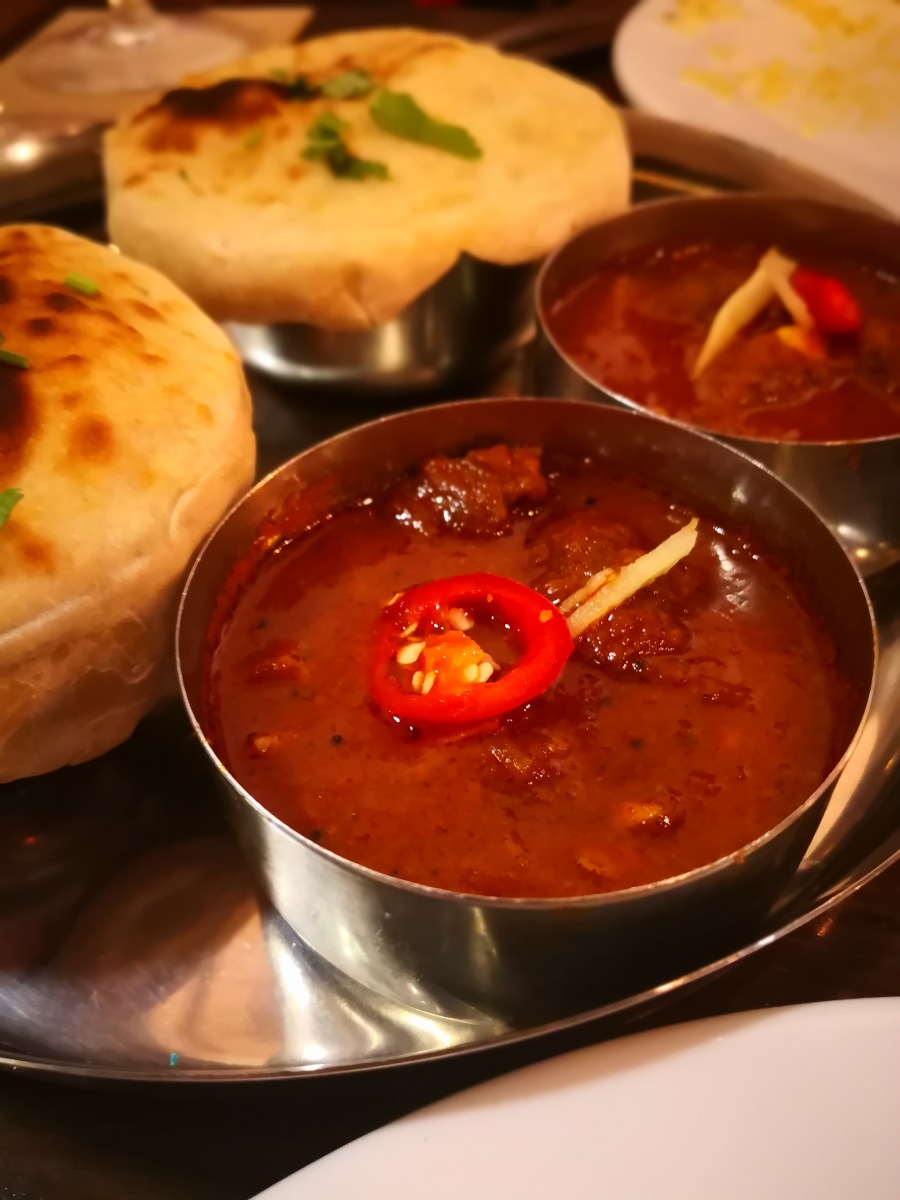 To finish our gargantuan meal, we were given Masala Chai (this one divided the room, as chai often does), and melon soup with ginger sorbet, which was one of the most refreshing desserts I’ve had in a long time, and the perfect end to the meal.

As ever, Nutmeg delivered a delicious and exciting evening of flavours, friendly service and first rate atmosphere.

I’m already planning my next trip back, and I’d highly recommend you visit too – it’s worth setting aside some quids for one of their special tasting menus. Thank me later.

Disclaimer doodle: We were invited along to this dinner free of charge but were not asked to send any copy in advance. All opinions are our own and what we can remember from a fantabulous if boozily hazy evening. 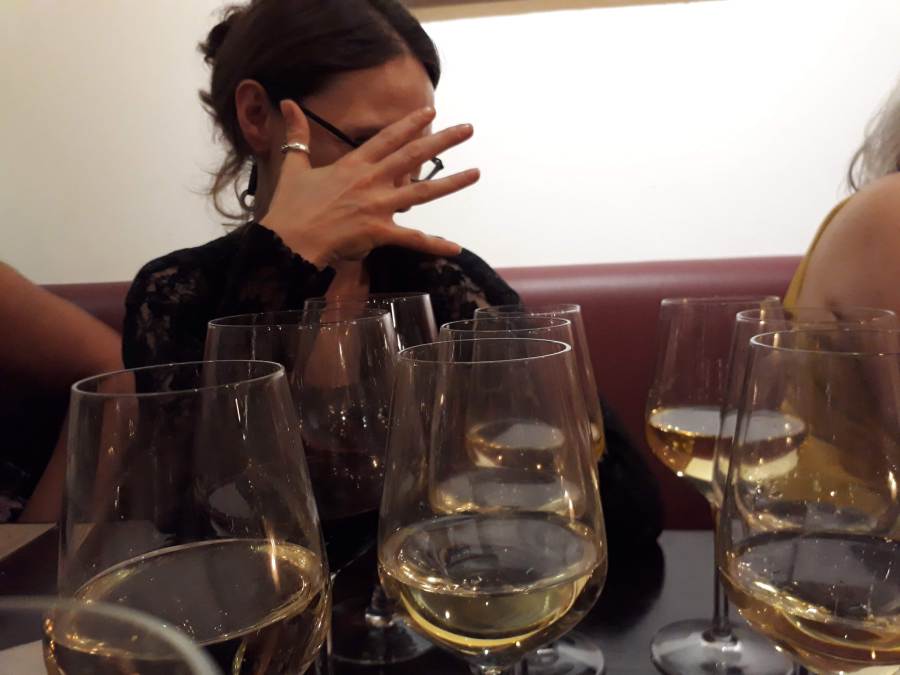