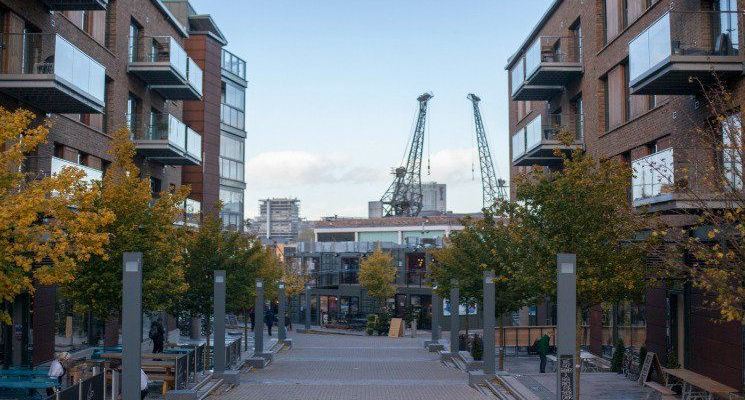 If you’ve been anywhere near Bristol Harbour in the last 18 months you’ll have noticed the transformation around Wapping Wharf – the area behind M Shed which bridges the gap between the centre and South Bristol.

The development encompasses some attractive newly built apartment blocks, the Gaol Ferry Steps which lead from the bridge all the way down to the harbourside, and CARGO – a funky collection of shipping containers which house an exciting variety of food & drink businesses. Cargo 2 arrives in spring 2017, which will make this arguably the best selection of food business in the city after St Nicholas Markets.

The most exciting thing about Wapping Wharf isn’t the architecture though (as you’ve probably guessed by the fact that we’re writing about it) – it’s that this area is purely dedicated to local, independent businesses. Instead of becoming an identikit stretch of Boots, Pret and Cornish Pasty Co, we instead have the first outlets for Lovett Pies & Woky Ko, as well as new branches for Biblos, Corks (which also allows you to have a glass or two of their wine & spirits on the premises) and Better Food.

I’ve become a regular in this part of town – so I didn’t need any convincing when a bloggers’ tour of Wapping Wharf was mooted, to give us a chance to speak to the people behind the businesses. So without further ado, here’s where we visited on our taster tour of Wapping Wharf (you can see all the activity from the day by looking up the hashtag #bbwapping)

Probably my most visited of the stops on our tour – Wild Beer Wapping Wharf is the 2nd bar from the team behind the Wild Beer brewery, with a focus on sour and unusual beers (on the day we visited there were beers brewed with everything from salted caramel through to lobsters & seaweed).

The bar always has a good range of Wild Beer offerings, as well as some exciting guest beers – for the less experimental among you there are always at least a couple of great lagers on tap, as well as a good range of wines & gins. To demonstrate their dedication to brewing & ingredients, the bar also runs fermaculture talks every other Monday, as well as occasional beer dinners, foraging days out and tap takeovers from other breweries.

@WBWappingWharf Freshest fish cooked en pointe….on a backdrop of the most varied aray of beers ….something for everyone!! #BBWapping 👍👌❤ pic.twitter.com/wCWAPSZtDO

One other thing that also brings me back here time and again is the food – instead of going with the expected meat-tastic menu favoured by other bars, Wild Beer have opted for a collaboration with Hook, a London-based seafood restaurant which the brewery owners loved, and decided would fit in well at the bar’s harbourside location.

On the tour we were given samples of the panko breadcrumb fish & chips, the chicken tacos and the seafood platter – all cooked perfectly, well-seasoned and generously portioned. As you can work out, it’s all quite sturdy fare, so if you’re in the mood for something a bit lighter my usual is the fish tacos with salad. Yum.

From beer & seafood to a temple of all things pork – Pigsty is a venture from 3 brothers and a Harlequins rugby player and is a good showcase for the top quality offerings from The Jolly Hog, as well as some other meaty treats thrown in for good measure.

The menu is full of sturdy dishes, from the Pig Mac (Pork patty, pulled pork & cheese baconaise in a brioche bun) to the Hoguettes (Slow roasted pork shoulder bbq croquettes – unnnnf) and Scotch Eggs, or you can go crazy with a Pig Board, which is exactly what we all had to share, and it came out looking ridiculously appetising.

Look at all that meat! As you’d expect, there’s not much in the way of veggie offerings, but the team are really friendly and the drinks selection is good for such a dinky restaurant – so if you’re craving something seriously stodgy, I’d point you in the direction of Pigsty every time.

Recently relocated from their old spot on The Christmas Steps, the Bristol Cider Shop has taken advantage of their new location by not only hosting more events (they’re now doing specialist cider tasting, cheese & cider evenings and cider speed dating alongside their regular Introduction to Cider) but also introducing a small menu for you to enjoy in the shop alongside some of their ciders. 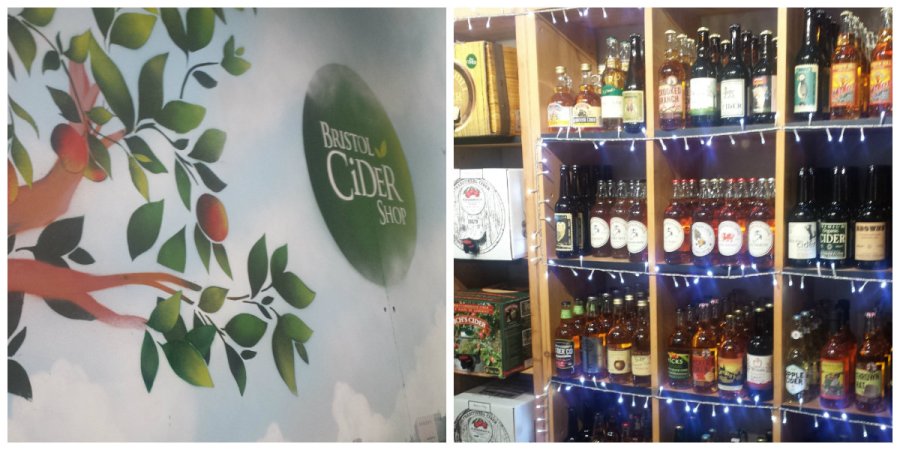 Some facts I didn’t know about the Bristol Cider Shop before our tour visit: ALL of their products are vegan, and ALL of their ciders are sourced from within a 50 mile radius of Bristol – impressive eh?

Did you know that Bristol @cidershop only stocks ciders from producers within 50 miles of Bristol? #shoplocal #bbwapping #cider #bristol pic.twitter.com/uW5p02NXpC

As you’d expect, they’re ridiculously knowledgeable and passionate about everything they stock, from the cider & perry through to pomona (sort of like an apple sherry – I LOVED it) and chutneys.

In addition to the bottles, you can also get flagons of their draft cider to take away, or 20 litre boxes (which work out around £1.50 per pint – tidy) should you find yourself hosting a party. The enthusiasm in here was infectious, and I’m looking forward to going back for a proper tasting event already.

Fourth stop on our tour was the coffee geek haven of Little Victories; the grown-up sister venture to the popular Small St Espresso.

As you might be able to see from the picture below, it’s a very chic and sophisticated place, without being pretentious, and the baristas are always on hand to advise you on any coffee queries.

Not only can you come here for some top notch coffee (and ask annoying questions about the shelves of mysterious coffee-making kit they have on display), but they also do sandwiches & cakes, as well as the added bonus of being licensed to sell beer, wines and some damn fine coffee-based cocktails, which you can accompany with a cheese or charcuterie board.

I’ve become quite the fan of their coffee cocktails since they opened (particularly their Espresso Martinis – although once we tried their Negroni my loyalties were torn), and it’s good to see the latest venture from this team do so well.

The fact that two excellent coffee shops can exist opposite each other (Mokoko offers slightly more in the way of cake & seating  whereas Little Vics is better for coffee & boozy offerings in my opinion) is testament to the demand for quality indies in the city. Long may it continue!

Our final stop, and the only business in Wapping Wharf that I hadn’t got round to visiting before our tour – Chicken Shed is the latest venture from Michelin starred and Great British Menu face Josh Eggleton, who is responsible for The Pony & Trap, Eat Drink Bristol Fashion and Salt & Malt (the 2nd branch of which is arriving nearby soon) to name but a few.

Although we were feeling fairly full from our gluttonous travels, the moment we were presented with platters of fried chicken, fries, slaw, chicken hearts, and liver on toast – well, we dived right in.

The chicken hearts were gorgeous – tender, smoky and really nicely seasoned, laying on a bed of really zingy tzatziki; I could’ve eaten a platter of those to myself. The same for the devilled chicken livers & mushrooms on toast – the toast was nicely browned and chunky, which was perfect for mopping up the rich and unctuous sauce. Even thinking about this dish has me salivating.

Sadly, I can’t say the same for the expected star of the show: the fried chicken, which was quite greasy and very bland; the crispy coating didn’t even taste like it had salt and pepper in it, let alone the usual spices and herbs that you’d expect. The buffalo wings were also a disappointment; the sauce was sweet and sour, sort of like more vinegary ketchup, and not at all like Frank’s or any other buffalo sauce you’d be familiar with.

It’s odd that the more unconventional parts of the menu were so good when the staples didn’t seem quite there (the Bloody Marys were also great, for the record) – maybe it was an off day when we visited, so I’ll go back at some point to try other parts of the menu.

Anyone know the best way to a food blogger's heart? #bbwapping pic.twitter.com/ofNcnmMS3r

So, that was our food tour of Wapping Wharf – hopefully it’s given you a taster for the variety and creativity on offer in the various businesses; let me know your favourites, and what you think of the places I’ve mentioned!

Thanks to Heather, the Bristol Bloggers and all of the Wapping Wharf team for such a great afternoon out. I can’t wait to eat my way around CARGO 2 once it opens!

3 thoughts on “A food tour of Wapping Wharf”