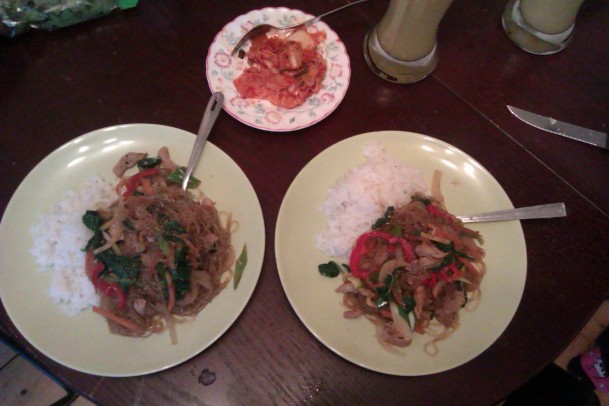 I really am not a good Korean girl.

For one, I can’t speak the language very well, having moved away at the age of five. But I also live the frivolous, drunken life of a typical British gal, just without the right to vote.

When it comes to food however, I think I’ve made my mum proud by having dabbled in Korean cuisine; more often than not imitating her style of cooking and combination of flavours to get the taste of home, quite literally.

With many dishes, especially Banchan (little side dishes), going straight over my head – I can cook a few key things that really hit the heritage spot (and my taste buds) in just the right way sometimes.

One of those dishes is called Jap Chae and is one of the easier Korean foodstuffs to make, with a good effort:return ratio.

Jap Chae is a kind of stir-fried noodle salad that can be eaten warm or cold, usually with rice. The noodles are made of sweet potato starch and look like long jelly worms (really selling it, huh?). This combination of noodles and rice may seem odd, but the noodles aren’t heavy and can also be eaten on their own. However, they are often seasoned strongly so that they can be enjoyed with sticky rice or alongside stews and millions of other banchans. We Koreans like variety, don’t you know?

Unlike many other Korean dishes, Jap Chae is kind to the Western stomach and does not contain any chilli. Instead, glass noodles (how they are commonly known) are mixed with stir-fried vegetables and meat, seasoned with garlic, soy sauce, sesame oil and sugar.

This may sound simple and it really is, but the flavour is incredible. This sauce can be used for a host of other things and you will always get the Korean-y vibe from it; kind of like when you add lemongrass and fish sauce to anything and a blind man can pick out the Thai influence.

See below for easy peasy recipe, also perfect for packed lunch. Just don’t go overboard like me and use a Hello Kitty bento box to carry it to work, might be a bit overkill.

Boil the glass noodles in water until they are soft but still chewy (about 5 mins). Drain and set aside. Add a splash of sesame oil to keep the noodles from sticking.

Slice the onion and the spring onions, then mince the garlic. Slice carrots and courgette Julienne style and slice the red pepper into long strips.

Add some oil to a wok and fry the vegetables including the spinach and garlic with splashes of soy sauce and some sesame oil until nice and golden. Add the vegetables to the noodles and mix.

Now fry the pork strips like the vegetables until nice and browned and cooked.

Mix everything together and add more soy sauce to taste and sesame oil. It depends on how salty you like it and whether you eat it with rice. If so, make it slightly too tangy. Add the sugar to ease off the soy sauce.

Serve with steamed rice, yo.